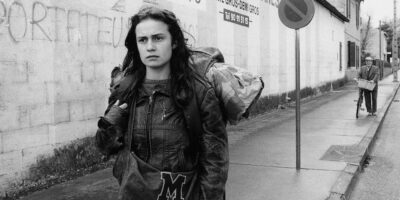 Whether in front of the camera or behind it, Agnès Varda was a visual storyteller who eschewed convention and prescribed approaches to drama. Sandrine Bonnaire won the Best Actress César for her portrayal of the defiant young drifter Mona, found frozen to death in a ditch at the beginning of Vagabond. Agnès Varda pieces together Mona’s story through flashbacks told by those who encountered her (played by a largely nonprofessional cast), producing a splintered portrait of an enigmatic woman. With its sparse, poetic imagery, Vagabond (Sans toit ni loi) is a stunner, and won Varda the top prize at the Venice Film Festival.

‘When I first watched Mona, she captivated me, her unapologetic independence a beacon of what I yearned for. In the scenes that follow these initial interviews, Mona, still alive, drifts through the wintry South of France, her stringy unwashed hair constantly blowing in her face. She has a backpack, a tent, cigarettes, and hardly any money. She gives no reason for her lifestyle and no backstory: she would prefer to say nothing at all. A rage simmers deep within her—she stomps across empty farm fields, the tracking shots unable to keep up—but for the most part, she doesn’t give a shit.’ Andrea Kleine, The Paris Review, 2018.