Discover our history from 1984 to the present day.

The Tabernacle, a former Wesleyan Chapel, was bought in 1984 . After extensive renovation, The Tabernacle re-opened as a centre for the performing arts on 11th October 1986.

In the months leading up to this, The Machynlleth Tabernacle Trust was established as a charitable company limited by guarantee with the central aims of:

These remain our aims to this day.

Initially the Trust’s activities were confined to promoting concerts in The Tabernacle. This was principally by means of the annual Festival starting in August 1987 and continuing (except for 2020) every year since.

A few years later the Trust presented its first public exhibition featuring The Brotherhood of Ruralists to wide acclaim. At the same time the Trust started to build a permanent collection of works of art. The nucleus of the collection had been transferred to the Trust from the Lambert family’s small private collection and on the day that The Tabernacle had re-opened in 1986, these paintings and drawings were shown on The Tabernacle stage. 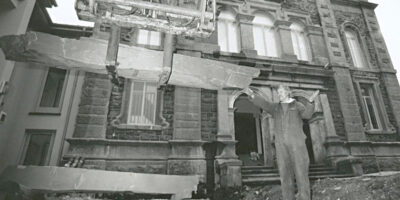 The new Auditorium had perfect acoustics but no ancillary services. To solve this problem a free-standing block, housing toilet facilities and a green room, was built on adjoining land.

In 1988, the Trust was able to buy Harvey House. This former grocer’s shop (that now houses The Ruralist Room and The Pulpit Room) provided much-needed street frontage on the main North-South Wales coastal road.

It took five years to raise the money to convert Harvey House into Art Galleries. Modest Government-related support came from the Development Board for Rural Wales in the form of a small but welcome grant. The building was renamed the Ellis Building after Tom Ellis of Bala (who had expressed the hope that chapels would become centres of culture and not just places of Sunday Worship). The first art exhibition was held in May 1992.

The Auditorium, the Green Room block and the Ellis Building were islands and in bad weather it was miserable moving between them. Help was not forthcoming from official sources and so the footings of a ‘Linking Building’, to connect the different spaces, was laid out to show what the Trust was trying to achieve.

The breakthrough came from Liverpool in the autumn of 1992 when the Trustees of the Foundation for Sport and The Arts offered a donation of £100,000. Their contribution to the capital and revenue funding of MOMA and The Tabernacle cannot be praised too much.

Accompanied by vigorous lobbying, this support from the private sector in turn mobilised generous funding from Government sources for the first time. Grants were received from the Welsh Office Rural Initiative followed by the European Regional Development Fund.

The construction of the Linking Building (designed by David Thomas) was completed in six months. At the same time, the provision of a new sound and lighting system, a recording studio, simultaneous translation facilities, and a language laboratory were realised. Lord and Lady Hooson opened the newly named Owen Owen Building on 3rd July 1994. The Chapman Trust generously donated the lift shortly afterwards.

Over the following eight years four additional major improvements took place, all of which were overseen by the Trust's Honorary Treasurer, Captain Richard Lambert.

In 1995 the facade of the Auditorium was made weatherproof.

In 1997 the entrance to the Auditorium was redesigned. The Forecourt was improved to make the approach to The Tabernacle more welcoming and to enable wheelchair users to enter the centre without assistance. Grants for these schemes came from the FSA, Powys County Council, CADW, Arts Council of Wales and Wales Tourist Board. The superb workmanship of the new entrance was undertaken by local builder, J B Roberts & Son of Corris.

In 1998 a wonderful bequest was received from the estate of Nora Gibbs and Mollie Winterburn. This enabled The Trust to purchase the adjacent building Ty Llyfnant and to convert it for use as an artist’s studio and music teaching and practise rooms.

A few years later, two small galleries on the first floor of The Ellis Building were converted into one spacious gallery (now known as The Pulpit Room). This was made possible by a legacy from the late John Silvanus Davies (Mr John Davies the China Shop), and an anonymous donation. 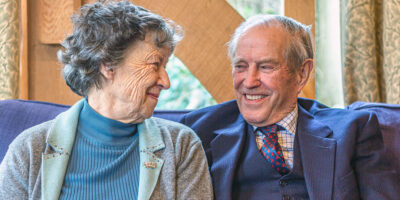 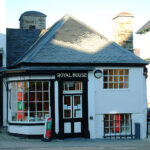 On 14 February 2000, Mr Gareth W. Thomas, Montgomeryshire Planning Officer for Powys County Council, wrote to the Trust regarding the plans for the restoration of Royal House, a rare example of an urban medieval dwelling located a short distance from The Tabernacle.

The Machynlleth and District Civic Society had been actively campaigning for many years for the preservation and restoration of Royal House. On 3rd April 2000, Ruth Lambert, Trust Chairman for many years and now Exhibitions Lead, wrote back to confirm that the Trust would be prepared to enter partnership with the Council in making the application for HLF funding. It was agreed that the Trust would accept ownership for the restored property on the terms set out in his letter, subject to a guarantee that the grants would cover the full costs of acquisition and restoration of the property.

It was also agreed that Powys County Council would enter into a Lease agreement with the Trust for the use of the front part of the building as a Tourist Information Centre once it had been restored. The latter part of Royal House was to be converted into a holiday cottage. The renovations were Project Managed by the Trust’s Honorary Treasurer Richard Lambert. Michael Goulden was appointed architect and J B Roberts & Son were appointed as the contractor with restoration works beginning on the 5th of February 2004.

On 18 July 2002, the Trust was able to place a deposit on the purchase of the derelict old Tannery building adjacent to the rear of The Tabernacle. A campaign was launched in October of the same year to raise the funds to complete its sale and renovation.

In 2003 the architect Mr David Thomas drew up initial plans for the restoration, and in 2004 planning permission was granted by Powys County Council. Between 2004 and 2008 grants were secured from The Garfield Weston Foundation, The Chase Charity and The John S Cohen Foundation, as well as from various private sources. A Project Planning Grant was also awarded by The Heritage Lottery Fund.

Following delays, the Trust’s plans for an art gallery and sculpture space in the Tannery building were reviewed in 2009. With great relief, building works commenced on 22 April 2010. Phase one, which predominantly focused on repairing the Tannery roof, was completed in Spring 2011.

On Thursday 23 August 2012, the bridge to link The Tannery to The Tabernacle’s existing buildings was officially opened by Philip and Joanna Lambert. By August 2013, new floors and a platform lift had been installed, and the walls prepared for use as a gallery and sculpture space.

In January 2014, the Trust agreed with the architects and builder to start work on the final phase of the project. A campaign was launched to raise the final funds and grants were secured from The Garfield Weston Trust and Arts Council of Wales, with further funds secured through the generosity of a range of private donors. These included Philip Lambert, who was the major donor to the project, along with a generous legacy from Sir Kyffin Williams.

In 2016 the Trust was able to purchase Glasfryn, a former residential property that is adjacent to the galleries at the front of the centre. Planning permission was obtained to convert this building into a secure and enhanced artwork store for the growing Tabernacle Collection.

Initial work was undertaken in 2017 to reinforce the building structure, to install a staircase, and to strengthen the ground floor foundations to accommodate professional artwork racking.

We are now raising funds to complete its conversion.

Help us to continue sharing world class exhibitions and events.

Explore our evolving collection of over 400 works focusing on artists living and working in Wales.

Immerse yourself in works of art by modern and contemporary artists shown across our seven art galleries.