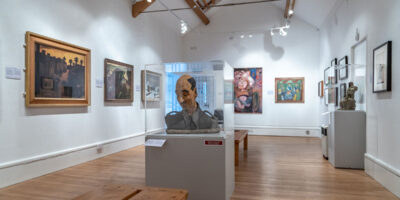 At a time when more refugees than ever before have been forced from their homes worldwide, a major exhibition about the role of refugee artists in British art from 1870 to the present comes to the Museum of Modern Art (MOMA) in Machynlleth.

The most ambitious exhibition in MOMA Machynlleth’s history has been developed in partnership with the Royal West of England Academy and brings together important works from public and private collections including Tate, V&A, Ben Uri Art Gallery, National Museum Wales and the National Library of Wales. Thousands of people are expected to visit the exhibition at the gallery, which was recently highlighted in the Guardian’s 10 best rural art galleries in the UK.

The exhibition, which features over 70 artworks across four galleries, looks back over the last 150 years to explore how migrant artists were perceived by their peers in Britain and how their influence excited or inspired new art. It explores the temporary exile of refugees from the Franco-Prussian and First World wars and the crucial influence of émigrés who came from eastern and central Europe during the 1930s and 1940s, while looking forward to the present when the reception of refugees from war-torn Iran, Iraq and Syria and their contributions to British life are more contentious than ever. It recounts extraordinary and deeply moving stories of escape from dispossession, persecution, intellectual oppression and war as well as fascinating interactions with British artists.

Amongst the artists included in the exhibition are French Impressionists Claude Monet and Camille Pissarro who sought refuge from the Franco-Prussian War, artists who came to Britain in the First World War such as Lucien Pissarro, George Minne and Valerius de Saedeleer and British artists who helped them, W. R. Sickert and Frank Brangwyn. At the centre of the exhibition is the extraordinary impact of émigrés from Nazi-dominated Europe, explored through works by Naum Gabo, Kurt Schwitters, Barbara Hepworth, Ben Nicholson, Peter Lanyon, Josef Herman, Heinz Koppel, photographers Edith Tudor-Hart and Bill Brandt and the animator Lotte Reiniger. More recent artists represented include Josef Koudelka, Samira Kitman, Hanaa Malallah and Mona Hatoum.

The exhibition’s guest curator, Dr Peter Wakelin, says,
Years ago I was drawn in by the stories of two artists who escaped to Britain from Nazi Europe, Josef Herman from Poland and Heinz Koppel from Germany, who had a profound impact here. It’s been a privilege to work on this exhibition and the accompanying book and look back over 150 years to get a perspective from Monet to Mona Hatoum. Refugees and émigrés have made extraordinary contributions in all walks of life – medicine, science, publishing, business, music as well as art. But opportunities have been missed at times when refugees and émigrés haven’t been engaged with by their contemporaries, so I hope the exhibition holds useful lessons for the future too.

Refuge and Renewal: Migration and British Art is accompanied by a full-colour publication from Sansom and Company, which will be for sale at the exhibition.

A lunchtime talk by Dr Peter Wakelin will take place at 1pm on Wednesday 8 April and a seminar bringing together expert speakers to explore the themes of the exhibition will take place on Saturday 9 May.

Refuge and Renewal: Migration and British Art is open Mondays to Saturdays, 10am to 4pm,
from 14 March to 6 June 2020. Admission is free.

Generously supported by The Richard and Ann Mayou Fund, The Lambert Family Charitable Trust and the Friends of The Tabernacle. Part of the Insiders/Outsiders Festival (www.insidersoutsidersfestival.org), a nationwide arts festival celebrating refugees from Nazi Europe and their contribution to British culture.

The Dyfi Estuary – An Illustrated History