Part of the BBC's 'Art That Made Us' festival 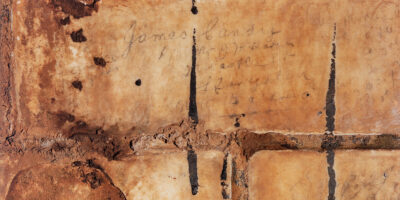 A chance remark at a children’s party led David Gepp to these silent signatures under ‘The Iron Bridge’ at Berwyn station, Llangollen. Wiping some of the mud off the wall revealed a fading trace; ‘James Candy… 23 Castle Street. Llangollen’. Around his signature were dotted others, dated in the time of the First World War, when these boy soldiers, probably sheltering from the rain, had passed the time as they waited for the train to take them towards the Front.

This series of photographs is the result of David’s many visits to Llangollen to document the autographs and monuments.

This exhibition is part of the BBC’s ‘Art That Made Us’ festival to coincide with the broadcast of a major new documentary series exploring how pivotal works of art, literature, design and music have helped shape our creative story.