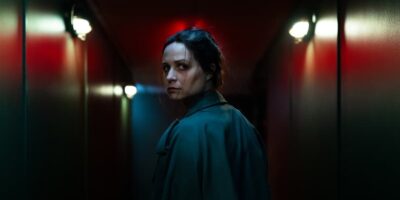 When film censor Enid discovers an eerie horror that speaks directly to her sister’s mysterious disappearance, she resolves to unravel the puzzle behind the film and its enigmatic director – a quest that will blur the lines between fiction and reality.

‘This thrilling, dizzying debut from Welsh writer-director Prano Bailey-Bond is a nostalgic treat for anyone old enough to remember the infamous “video nasties” scare of the early 80s. Yet beneath the retro surface lies a more universal tale about the power of horror to confront our deepest fears – a timeless celebration of the liberating nature of the dark side. Blessed with a sharp eye for period detail and a refreshingly irreverent attitude to nerdy fan-boy “facts”, Censor conjures a serpentine tale of trauma, repression and liberation, all mediated through the deliciously tactile medium of illicit videotapes and pre-internet media panics… the future of cutting-edge horror is fearless, forthright and female.’ Mark Kermode, The Observer.