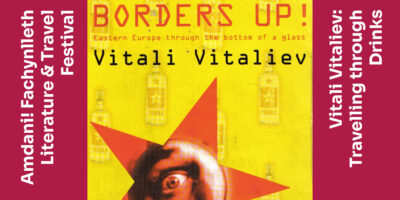 Online tickets for this event are no longer on sale but will be available to purchase on the door.

The first investigative journalist in the old Soviet Union, Vitali Vitaliev was forced to defect from the USSR in January 1990 – the result of his ground-breaking and courageous investigations into Soviet organised crime, neo-fascism, political prisoners and persecutions.

He has been awarded several Journalist of the Year awards and received the Nieman Fellowship in Journalism from Harvard University (USA) – the most prestigious title that can be bestowed to a professional working in the field of international investigative journalism.

Since his escape to the West Vitali has worked as an editor and columnist and appeared on both serious and satirical TV and radio programming. Vitali has published eleven books, all written in English and translated into many languages,

Vitali will take us on a journey he once undertook through drinks – rather than countries – through Eastern and Central Europe and we’ll find out how closely alcoholic beverages are linked to everything else in a society: culture, technology, architecture, economic development. You’ll learn about the fascinating history of some vodkas and beers, wines and liquors, and the important social and political roles they played and continue playing. You’ll also find out the “correct” ways of drinking some of them which may differ from what we are used to. The talk will be based on Vitali’s best-selling book “Borders Up! Eastern Europe Through the Bottom of a Glass” and on his other rich impressions of a compulsive traveller and an experienced (if moderate) drinker.

In line with Government guidelines, as of 15th November 2021 you will need to use the NHS COVID pass show full vaccination status or a negative Lateral Flow Test to attend any events at the festival.

You can apply for the NHS COVID Pass through the NHS website: