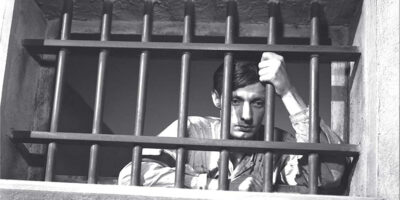 ‘A taut, anxiety-laden prison break drama… When French Resistance fighter Fontaine is captured and condemned to death by the Nazis, he resolves to escape. Despite the risks, he begins to meticulously dismantle each obstacle to his freedom one after the other. Will he make it? With a typical French appetite for the poetic and the pithy, this film stands leaps and bounds ahead of the rest of its genre. That said, you will notice there is very little music and the performances of the actors are incredibly restrained. In stripping away movie conventions to the bare bones, Bresson plunges us into the bleak reality of Fontaine’s situation.

This tell-tale minimalism is a major feature of Bresson’s work, the viewer is invited to produce the emotion themselves. What results is a profoundly beautiful cinematic experience. Jean Luc Godard famously wrote of him, “He is the French cinema, as Dostoevsky is the Russian novel and Mozart is German music.” Other key films from the director include Au Hasard Balthazar (1966) and Mouchette (1967). Another recommendation in the same genre is Jaques Becker’s Le Trou (1960).’ Keith Turbo.